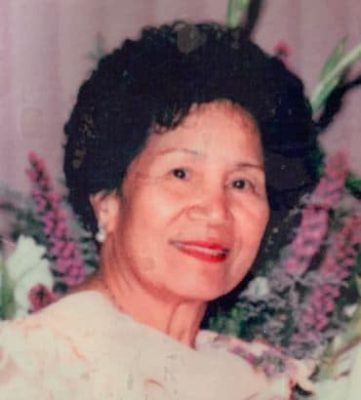 Maria Aguilar Ramos passed away on October 2, 2021 at the age of 96 at her home in Union City, CA.  Maria was born in Maui, Hawaii on September 8, 1925 and was raised in Ilocos Norte in the northern region of the Philippines.  She was the second to the youngest of eleven children of Pelagio and Victoria Marcos.  Maria graduated from Philippine Normal College with a Bachelor’s Degree in Education.  She became a teacher at Doctor Albert Elementary School in Manila for 25 years.  Maria met her late husband, Amador Aguilar, a lawyer in Manila.  They made their home in Manila and had four children, Evelyn, Daniel, Jane, and Jocelyn.  Maria, along with her husband and children, immigrated to Chicago, IL in 1973, and moved to Union City, CA in 1975.  Maria’s husband, Amador Aguilar, passed away unexpectedly in 1976.  Maria then took on various employment opportunities in Union City, Hayward, San Jose, and San Leandro ranging from Production Associate to Teacher’s Aide before she finally retired at the age of 70 years old.  Maria was a devout Catholic who loves God with all her heart.  She was an active member at St. Anne’s Church in Union City, CA.  Her ministries include being a Lector, Choir Member, and Eucharistic Minister.  She was passionate about reading the Word of God in her church.  Maria was a social butterfly who enjoyed entertaining Seniors with her beautiful singing, playing the piano and dancing at the Ruggieri Center in Union City.  In addition, she sang at family parties, church festivals and enjoyed the laughter, friendship and praise of her talent.  She also learned to play the harp while in the Philippines.  Her hobbies included cooking, gardening and beautifying her home with roses.  Love was in the air at the Ruggieri Center when she met her second husband, Arturo Ramos.  Maria and Arturo enjoyed several years together before his passing.  Maria leaves behind her four children, seven grandchildren, and eight great-grandchildren.  Maria will be deeply missed by her family, and she will continue to live on in the hearts of her loved ones.  In lieu of flowers, you can honor Maria by donating to her heartfelt charity - Smile Train. You can donate in her name at the following website: Smiletrain.org.